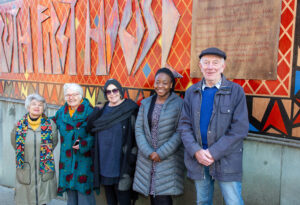 The City of Durham Parish Council recently commissioned the restoration of the mural by one of the original artists Lotte Shankland and were delighted to unveil this at a joint event with Durham University on Monday 7th March.

The mural is located on the side of Ruth First House on Providence Row in the City. Ruth First was an exiled South African anti-apartheid activist, journalist and Sociology lecturer who lived in Durham between 1973 and 1978 and attended meetings in this building. Ruth was assassinated in Mozambique in 1982, where she was working while on leave from Durham University, by a parcel bomb sent by South African police.

The original plaque and artwork were erected to coincide with the first free democratic elections in South Africa in 1994.

The mural was unveiled at the event by Ruth First’s former University colleague Hilary Wainwright and the current Ruth First Scholar Shamiso Zamba.

Chair of the Parish Council Coun. Alan Doig said: “We are absolutely delighted to honour a wonderful person associated with our parish in this way. The original mural was looking very worn and the Parish Council is thrilled to have the restoration work commissioned by one of the original artists. This is such a great enhancement for Providence Row and a fitting dedication to a remarkable lady.

“This year marks the 40th anniversary of Ruth’s tragic assassination. We really hope this mural continues to keep the memory of Ruth and the tolerance and justice she fought for alive.
“It is also exceptionally fitting that the mural was unveiled in the same week as International Women’s Day.”