The City of Durham Parish Council is here to represent all residents of our community – whether student residents or year-round permanent residents – we are here to support all of our neighbours.

The Parish Council has been shocked to see the scenes of students queuing outside estate agents in the City in the desperate hopes of securing accommodation for next academic year. The scenes have hit national headlines and are a cause of great concern to us all.

The City of Durham Parish Council will be writing to Durham University, Durham Students Union, Durham County Council and the local Member of Parliament to seek an urgent meeting to try and resolve these issues.

No individual or organisation should rush to the conclusion that this housing crisis is caused as a result of a lack of private-rented HMOs in the City. Indeed, the statistics below show otherwise and in fact we have seen outlying areas of the City also experience an increase in private student accommodation. A statement last month from the University that there had actually been a reduction in private-rented accommodation in the City has no basis in fact and has yet to be retracted.

Be in no doubt that this issue is caused primarily as a result of landlords releasing their properties into the market almost immediately and the University’s obsession with an unsustainable expansion policy, which is driving permanent long-term residents out of the City. This expansion policy is in no way accommodation-led and the University’s aims of having 50% of students ‘living-in’ University accommodation is nowhere near to being achieved.

The Parish Council is calling on the University to move forward urgently with the six PBSAs it promised the residents of Durham at the Examination in Public into the County Durham Plan in 2020 and to make these affordable. It is deeply concerning to see the proposed accommodation places in these PBSAs slowly falling by the wayside; with the numbers at James Barber House already being reduced and a planning application for an independently funded PBSA at Mount Oswald to house 850 students, which was submitted two years ago, has not progressed since June 2021.

The crippling and exploitative costs of College accommodation is also pushing students into the Durham housing stock and it is time for the University to take action on this and put people ahead of profit.

The stress and mental strain this must all be causing our student residents is appalling.

Stats on private-rented student lets in DH1 as of April 2022: 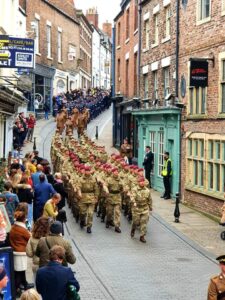 Preparations for Durham’s annual Remembrance Parade are well underway, with hundreds of serving members of the Armed Forces expected to arrive from all parts of the UK for this great event.

The parade is once again organised by the City of Durham Parish Council and will be led by the Band and Bugles of Durham Army Cadet Force which will lead a strong detachment from our county Regiment the Rifles proud successors to the Light Infantry and the Durham Light Infantry.

This year’s parade will march past the memorial to the Victoria Cross holders of the Durham Light Infantry to pay respects those great heroes of Durham.

The heavy drill elements of the parade which will feature some 200 plus troops will be led by two Cavalry regiments, the Light Dragoons and Royal Lancers (Queen Elizabeth’s Own).

Also included in the heavy drill elements of the Army will be the Royal Army Medical Corps, Royal Electrical & Mechanical Engineers and the Royal Military Police.

The civilian services which will include nurses, prison officers, paramedics, police officer and fire service Standard Bearers from throughout the UK, will be led by the Durham Constabulary Brass Band and Durham University Brass Band.

The parade will march through the Market Place at approximately 11:20am on Sunday 13th November and the Salute will be taken by Mrs Sue Snowdon His Majesty’s Lord Lieutenant for County Durham.

In addition to the Remembrance Sunday activities, Durham City will gather in the Market Place on 11th November – Armistice Day – at 11:00am, where wreaths will be placed at the Durham Light Infantry Memorial statue.

Chair of the City of Durham Parish Council’s Business Committee, Coun. Elizabeth Scott said: “Durham has an incredible history of armed forces service and this Remembrance Day, the Parish Council is exceptionally keen to play its part in ensuring that we do everything we can to commemorate the sacrifices made by that brave generation. We are delighted to once again take on the civic duty of hosting this important event this year and I hope that all of County Durham can come together and pay our respects at this event.”

The people of Durham are invited to witness the Armistice Day and Remembrance Sunday parade and cheer on His Majesty’s forces past, present and future. 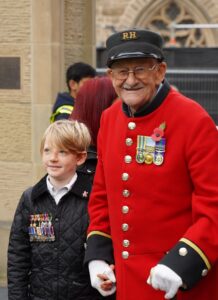